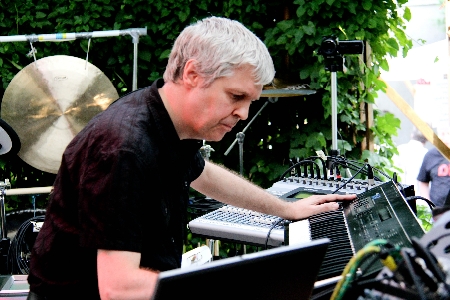 Johan, or the man behind Venja. It all started when Johan was a little boy… his first instruments were build by himself: percussion and drums were made of empty boxes. This continued so for several years which made his parents decide that he should get some music education.

The guitar was the first instrument he learned to play and flute and keyboards came later on. Thanks to a school friend he learned about the synthesizer… the endless sound capabilities changed his musical life completely which made him almost forget his guitar. At that time he was studying electronics and so got his engineering degree. This made him decide to build his first synthesizer, drum machine and effect processors himself. A bit later he and his cousin founded the electro/new wave band ‘Another Season’. After several unsuccessful years Johan decided to start a solo-project: Venja was born. Already owning a self build synthesizer and some other self made equipment he released his first album ‘Modesty’ on tape in 1987. Three more albums on tape followed: ‘Cloudscapes’, ‘Touched by Emotions’ and his last album on tape in 1992: ‘Rapture!’ It was ‘Rapture!’ which got him some recognition in the Electronic Music scene in Belgium, The Netherlands and Germany.
‘Arcadia’ was the first album on the digital CD format and was sold through several distributors world-wide.
Right after the release of this album Venja got signed by the respected German record label IC/Digit Music. 5 albums were released there and several titles appeared on many compilation albums. Some years later IC/Digit Music was taken over by DA-Music (Deutsche Austrophon) and three of his albums got re-issued and still sell until today.
The most recent CD album is Mode Zen and is also available through digital download stores as well.